A lad packed with pace and flair – any head coach would dream to have him in the squad. Meet the 2018 FIFA World Cup’s official mascot called Zabivaka. 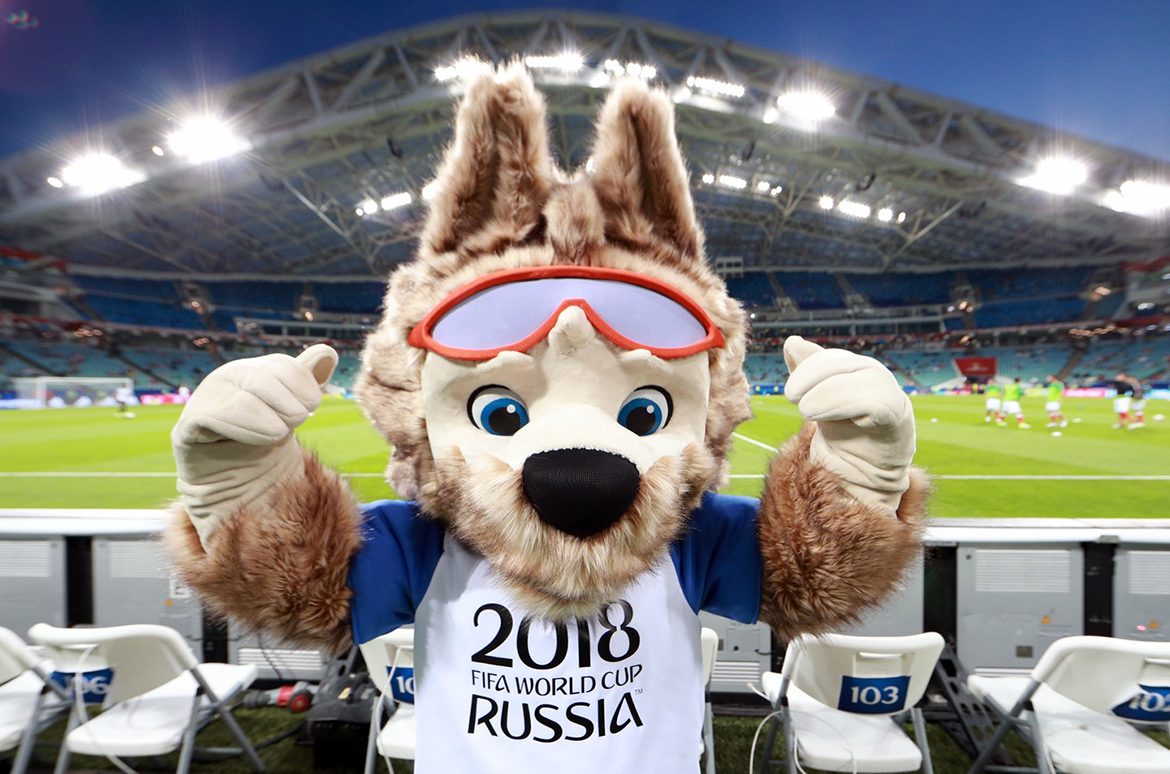 The word, which may sound a bit unusual to foreign ear, was specially coined for the occasion by Russian people’s common effort in a creative grassroots process followed by a televised culmination when Chairman of the Organizing Committee, former Sports Minister of Russia Vitaliy Mutko finally revealed the name. It derives from the Russian verb “to score”. So in football context Zabivaka means “he who scores” – or “the one who scores” as the mascot’s official page on FIFA website says. The suffix -aka hints on traits such as audacity, spirit as well as a drop of mischief or hooliganism, too. There is only one vowel and consonant difference between it and an actual Russian noun “забияка” /zabiyaka/, which translates as “ruffian, bully, thug”. So Zabivaka does sound like someone you do not want to mess with, daring and eager to join the fray. But is it not exactly the qualities we are all looking for, in football terms? Throw his wolverine senses into the equation – and you realize that you are facing a player who can see a chance coming before everyone else, will dash for the goal as fast as lightning, and may create goals and chances out of thin air. 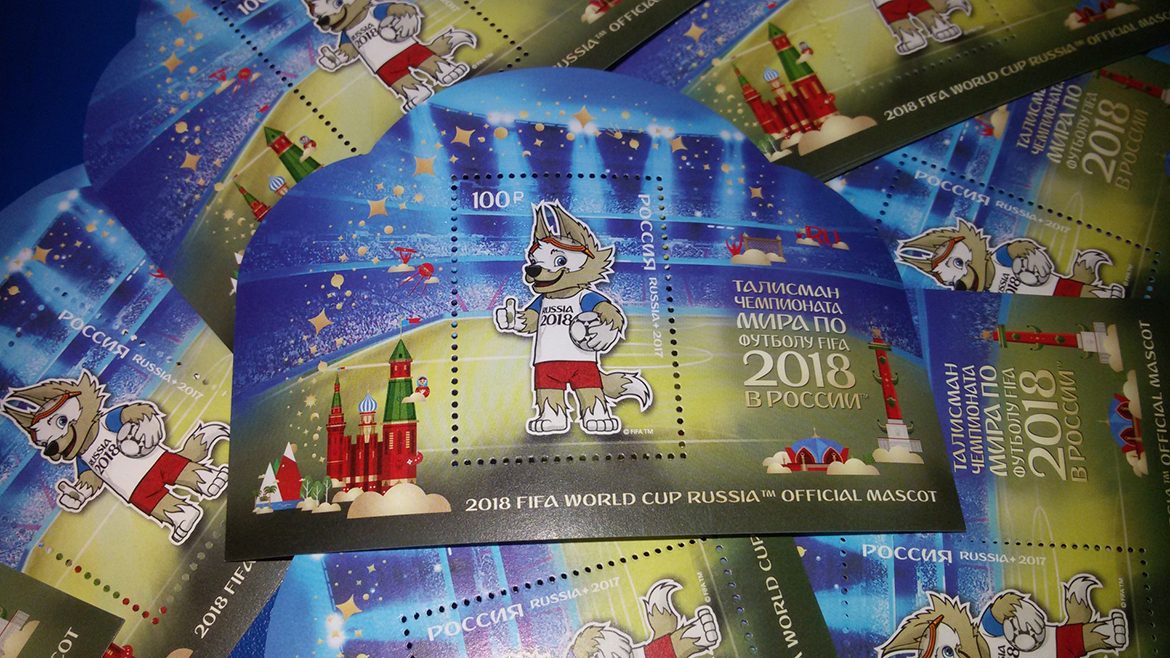 The team’s most valuable attacking asset: what is he like?

The mascot was unveiled back in October 2016. So we have had enough time to get to know him better. Because goals win games, Zabivaka is his team’s most valuable asset with exceptional skills, both on and off the ball. But his star potential did not go to his head. Bold on the pitch, he has a most charming nature. This lad is someone you would like to mingle with: fair, kind and brimming with confidence. According to Zabivaka’s official biography – yes, he has one – he is the youngest player in the starting XI. But he is loved and respected by his comrades for his excellent service and engaging personality. 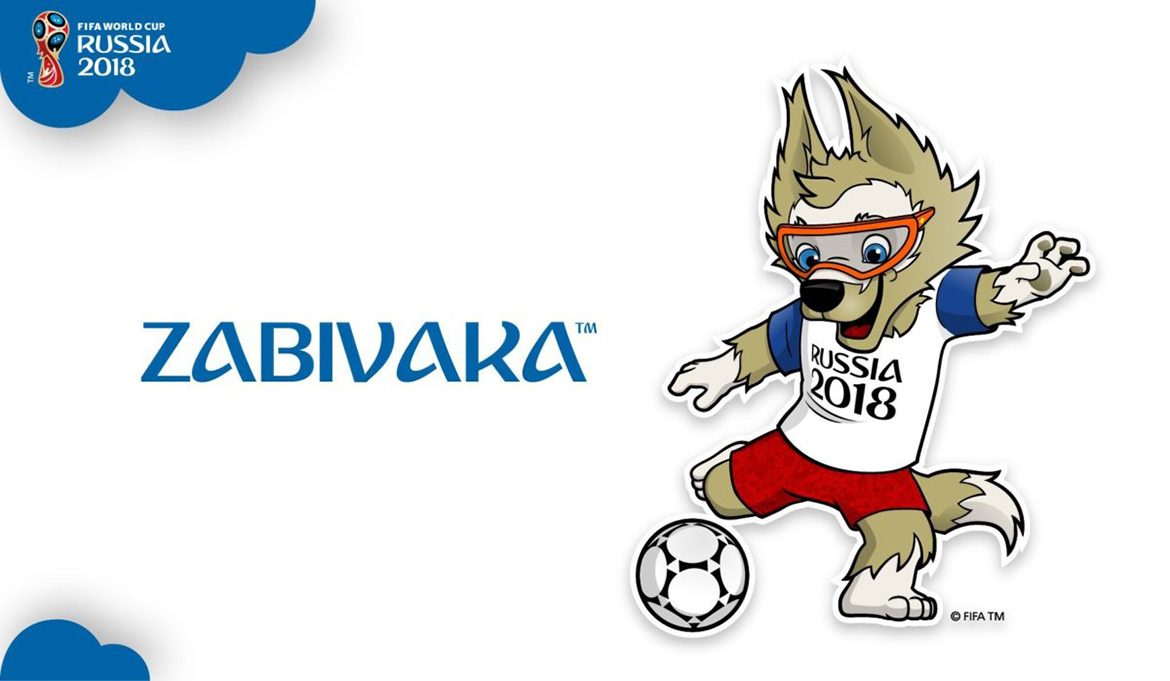 Actually, a wolf character should hold a lot of appeal for Russians themselves. As somebody pointed out once, wolves may be less powerful than lions but you cannot train them to perform in circuses. In other words, you cannot make a wolf dance to your tune, or teach him your tricks. The wolf is full of tricks himself, and he can easily outsmart you. In popular mentality, the wolf epitomizes a strong sense of independence, a keen intellect and an uncanny ability to avoid traps. Zabivaka on the field will give the opposition a memorable run-around, depend upon it! 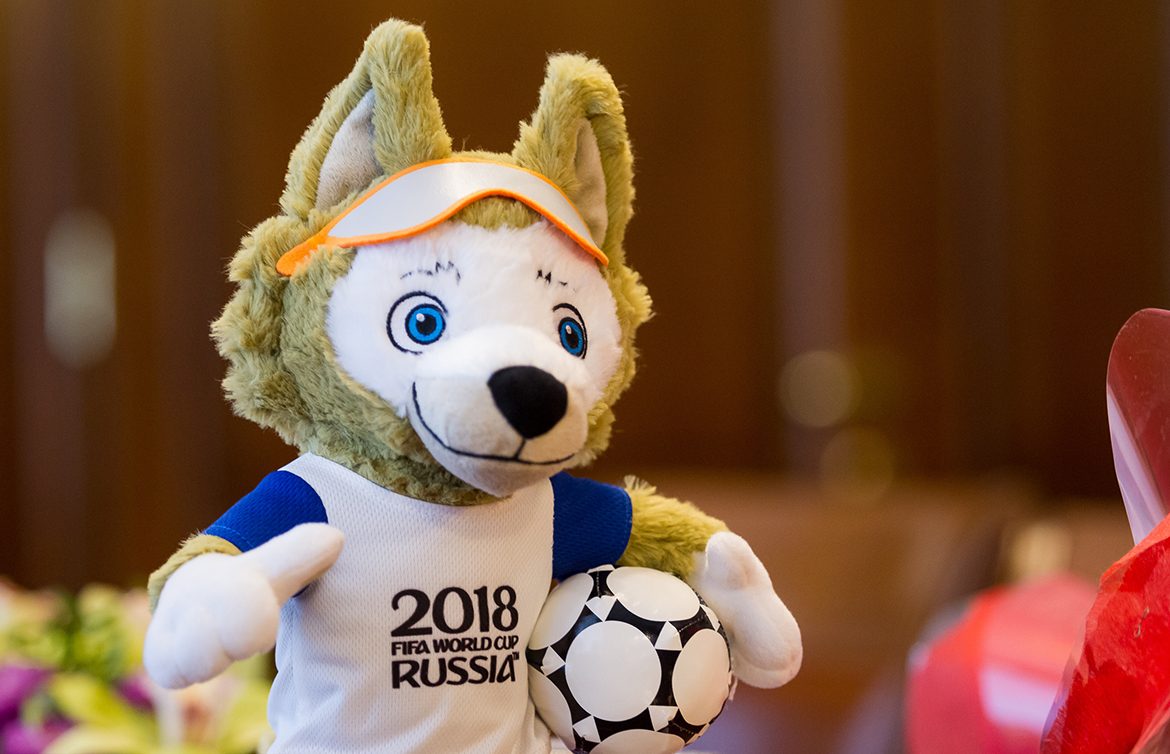 How did he rise through the ranks?

To earn his spot on the squad, Zabivaka had to deal with pretty serious competition from Siberian tigers, cats and even extra-terrestrial alien creatures. He came out on top, though, winning a hefty majority of the votes cast via social media, TV-shows and on the FIFA’s official website. More than half a million people from all over the globe turned out to be in favour of the Wolf. Zabivaka grabbed the overwhelming 53% of the votes, with Tiger and Cat trailing distantly behind. The runner-up claimed 27%, and the third-placed character got 20% of the votes. 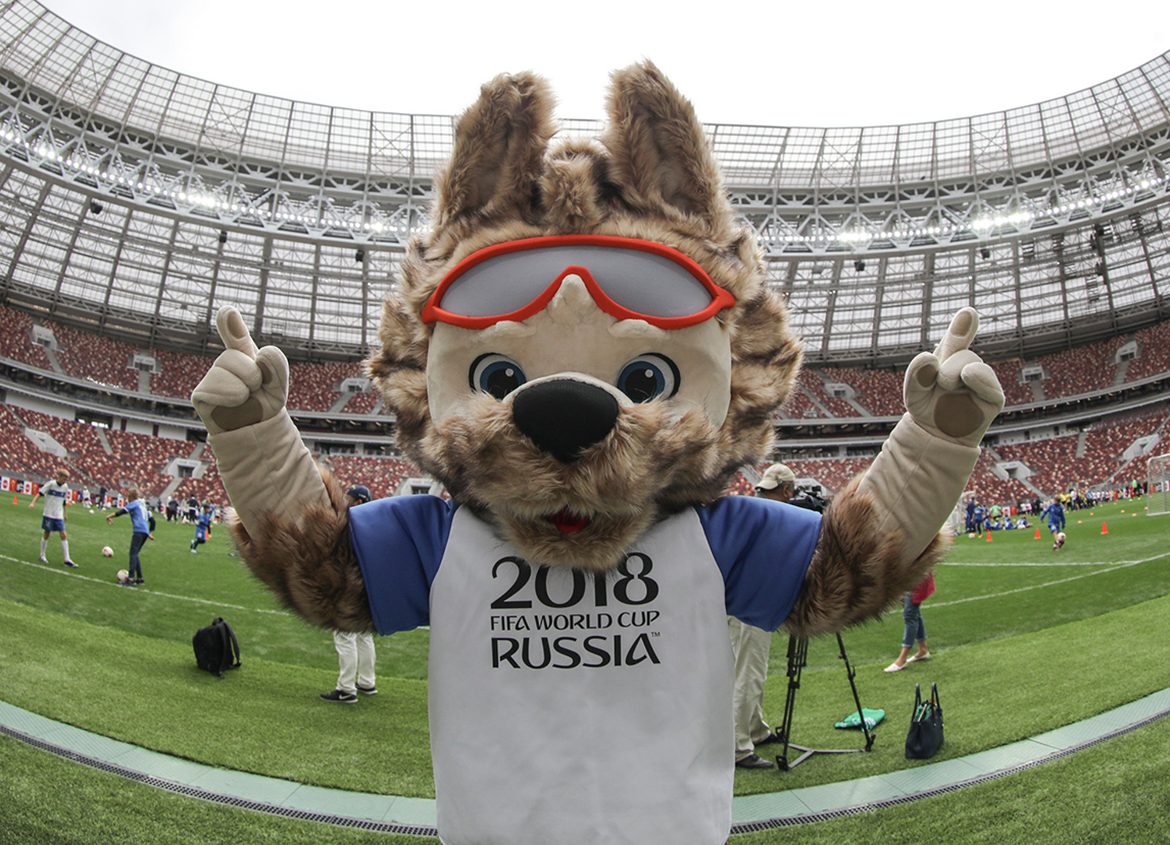 The one who scores should be creative, but do you know how he was created?

The official mascot of 2018 FIFA World Cup Russia was created by a girl, a student from Tomsk called Bocharova Katya who studies graphic design. Naturally, Zabivaka will take to the pitch wearing Russian national colours: red, blue and white. An interesting touch to his outfit is the pair of orange-rimmed goggles. You may ask: who on earth would want to wear goggles while playing the beautiful game in a summer competition?! Well, Zabivaka does. And this year tournament’s hosts believe the unusual feature will make the Russian Wolf memorable for many years. He is just so fast he cannot do without goggles protecting his eyes.

However, Zabivaka came to being through a complex procedure. At the first stage, the World Football Cup organizers asked children to draw the mascot the way they saw him, and submit their works. Then the Committee selected 10 pictures they thought were the best. The pictures were passed on to young people studying arts to be developed further. The latter had to sketch the characters. When those were ready, the sketches were shown to a star-studded jury tasked with picking out the best three. The finalists were posted on FIFA Internet site for people to vote on. The rest you know. Zabivaka was a huge hit.

It is interesting, though, that when Miss Bocharova showed her brainchild to experts, they did not think much of it. By the way, Katya says she was inspired by her own toy terrier’s muzzle, the eyes and ears in particular.

The poll results did not go down well with everyone. Quite a few people thought the winner looked out of place, was too funny and strange. There came a wave of criticism and fault-finding. There were many sneers and other nasty remarks. Fortunately, now when the World Football Cup 2018 is about to kick off, the tongues have stopped wagging.

One of the most unexpected and controversial things with Zabivaka is his ski goggles. But why he puts them on, we have explained above. The other unusual feature about the mascot’s outfit is his missing boots. There were so many questions concerning this that the creatress had to explain why her Zabivaka wore none. Wolves do not need boots to run, she said. The simple and stylish explanation, one should agree.

Well, and the name of course. Russians jumped at the occasion. Quibbles and puns came hailing from all directions. In Russian, you can easily create new nouns by adding suffixes to various verbs. And Russians have a penchant for taunts and jests linked with the folks’ drinking habits. So some trolls already coined Nalivaka, stemming from “наливать” /nalivat/ which is often used to say pour vodka into the glasses’. In the same way, one can coin Zalivaka, which can also be associated with heavy drinking: “заливать сливу” /zalivat slivu/ is another jocular Russian expression meaning to booze. But which of football celebrities never came under the fire of public criticism and shaming?

And one of them, who spoke out in support of Zabivaka, was Cristiano Ronaldo. At the presentation he said he liked the 2018 FIFA World Cup’s animal symbol, and pointed out that the upcoming tournament will be remembered by its mascot, too.

Another person who should be mentioned is the Russian national team’s head coach. Stanislav Cherchesov said he liked the name, and went on to add that there were many forwards in the world to whom one could apply the new word Zabivaka. In that respect, he mentioned his country squad as a positive example.

Anzor Kavazashvili, the well-known Soviet goalkeeper who took part in the World Football Cup 1966, was not as optimistic as Cherchesov. He frankly pointed out that Zabivaka’s goggles brought to his mind a pair of rose-tinted glasses, and warned against praising the national outfit’s game too much and too soon. However, about the Zabivaka’s character, the former goalkeeper was absolutely positive saying the Wolf looked nice. Kavazashvili said that the Tiger and the Cat, in his opinion, appeared clumsy next to the Wolf.

The popular Russian commentator Gennadiy Orlov compared Zabivaka to the 1980 Moscow Olympic Games’ mascot Misha, which is probably the highest compliment Zabivaka can earn. Orlov said that kind-looking mascots remind us all that sporting competitions are about fair and good-natured contest, in which opponents should respect one another. On the other hand, he pointed out the fiery glint to the Wolf puppy’s eye makes him a really interesting character.

Shops all over Russia stock Zabivaka souvenirs and merchandise. But the tournament’s organizers advise against buying them elsewhere from FIFA official outlets, which carry only certified goods of appropriate quality. FIFA stores attach a special protective hologram to all items they sell.

The popular goods with Zabivaka’s image are magnets, peaked caps, socks, backpacks, smartphone cases, aromatic air fresheners for cars, drinking glasses, stationery and balls, of course. Those who go shopping for kids will be delighted with an array of garments suitable for children of all ages, from toddlers to teenagers. Zabivaka’s most devout fans will surely like notebooks and calendars with the Wolf’s image on them. But most sold and bought items are stuffed Zabivaka toys, available in every possible size.

By the end of May, there should be at least three stores in each city where one can buy Zabivaka souvenirs. For major cities, the figure is up to 6.

• The smallest statue of Zabivaka has been made by the Russian micro-miniaturist Vladimir Aniksin. He created it in a poppy seed! The figure can be viewed through a microscope only. It took the artist about one month to make it, and Vladimir says it is the second version since the first poppy seed got accidentally lost. The microscopic Zabivaka is an exact replica of his full-sized version. The Wolf sports the same orange-rimmed glasses and all. Aniksin’s Zabivaka is the smallest copy of a FIFA World Football Cup’s mascot ever made so far!

• And the biggest statue of Zabivaka can be seen in the central park of Rostov-on-Don. Their Wolf weighs some 200 kilos towering over visitors at the height of 4 meters!

• Nizniy Novgorod is going to create the biggest street art with Zabivaka. The space measuring 16 by 10 meters is on a wall of a cancer clinic for children.

• A certain Brazilian model liked Zabivaka so much she promised a nude photo session with a picture of the Russian Wolf painted on one of her breasts.

• In spring this year, Russian cosmonaut Oleg Artemiev brought a figurine of Zabivaka to the International Space Station. The cosmonaut says his son who is a big football fan asked Dad to take the mascot along.

• The author of the original sketch submitted to FIFA received just $500 for her work, a ridiculously small amount. This is the fee she was paid in return for copyrights. But Katya says she does not bear a grudge because that was the contracted sum, and hopes she will have chances to develop mascots for other contests.